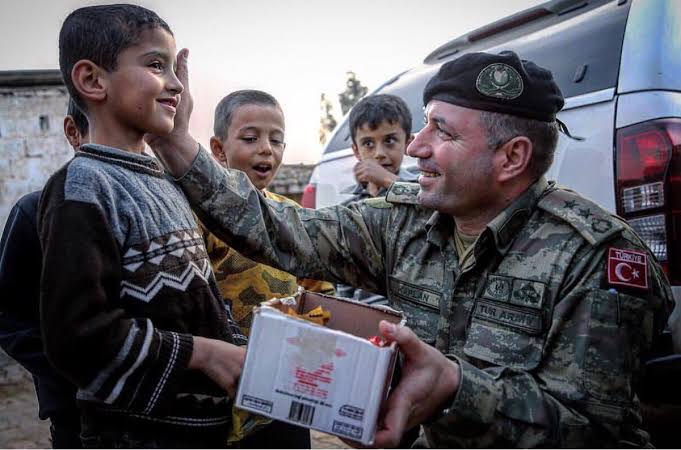 Turkey is making extremely comprehensive and successful operations in recent years for the purpose of national security and regional peace. That’s why Turkey is on the world agenda. Operation Peace Spring is the last of these operations. Turkey against YPG-PYD / SDF launched a cross-border operation into northern Syria in order to contribute to regional peace and national security on 09.10.2019. YPG-PYD / SDF, an extension of the terrorist organization PKK, threatens the security and peace of the regional states and poses a risk to world peace. In this operation, Syrian National Army consisting of Syrian Arab and Turkmen dissidents stands by Turkey. This operation is a continuation of the previous Suleyman Shah, Euphrates Shield, Afrin and Claw operations. Also this operation has a purpose that to create a safe zone free from terror, to eliminate the problems of terrorism in Turkey and to return 3.6 million refugees who have been living in Turkey for years due to the Syrian Civil War.

In the international arena, the forces trying to portray our state as invaders claim that it violates the UN Charter 2/4. What is this 2/4? According to Article 2/4 of the UN Treaty, “All members refrain from resorting to any threat of force or use of force in their international relations, either against the territorial integrity or political independence of any other state, which is incompatible with the purposes of the United Nations.” The ban on the use of force, also known as the UN 2/4, is said to be aimed at protecting world peace. All states that oppose us today argue that we do not comply with this clause and that it will return to us as sanctions. They make their sanction decisions based on this. I refrain from being political here because all sanction decisions have political reasons. For example, as Mevlüt Çavuşoğlu stated in his statements, France took a sanction decision because it supported the terrorist organization.

According to the statement, our operation is based on Article 51 of the UN Treaty. This article regulates the right that we call self-defense and applies in international law. I’m quoting Article 51 exactly “Nothing in the present Charter shall impair the inherent right of individual or collective self-defence if an armed attack occurs against a Member of the United Nations, until the Security Council has taken measures necessary to maintain international peace and security. Measures taken by Members in the exercise of this right of self-defence shall be immediately reported to the Security Council and shall not in any way affect the authority and responsibility of the Security Council under the present Charter to take at any time such action as it deems necessary in order to maintain or restore international peace and security.” This right is still a debate on the right to self-defense. As can be expected, for the first time the principles of the United States have been put forward. In 1837, after an incident in which the British seized and destroyed a ship at an American port, the US Secretary of State set out the basis for correspondence with the British authorities.

First of all, it should be noted that states have not reached an agreement on the concept of terror in international law. The reason for this is that each state considers its own interests and imposes different meanings on terrorism. A person considered a terrorist in one country can be declared a hero in another country. Maybe that’s why we can’t tell the world what’s wrong. Our problem is not with the people of the region. Our problem is with the extension of the PKK YPG-PYD / SDF terrorist organization. This organization both in Syria and threaten the territorial integrity and political independence of states are profoundly affect the security of Turkey and the region. Today, there is no definite consensus on this issue. Perhaps after this operation a new concept will emerge all over the world. Terrorism is an organized crime that the UN Treaty cannot think about and take measures.

Republic of Turkey today has become one body against all imperialists, just as the War of Independence. Law is a matter of logic. International law is both logic and benefit. Turkey is in a relentless fight against the terrorist organizations that threaten the integrity and political independence. Turkey is not like the United States that would say “democracy” and turn the region into hell. Turkey and the Turkish army fight just to keep the innocents alive . Today, the states accusing us of violating the prohibition on the use of force are the same as those who say, “What is international law, let me ask my counselors”. We call them “the Turkish Army fights all imperialists to keep the innocents alive”. We call them, “It is difficult to be a Turk, you fight 7 worlds but it is more difficult not to be a Turk, you will fight against the Turk!” As long as we exist, there is no gate to the imperialist henchmen!