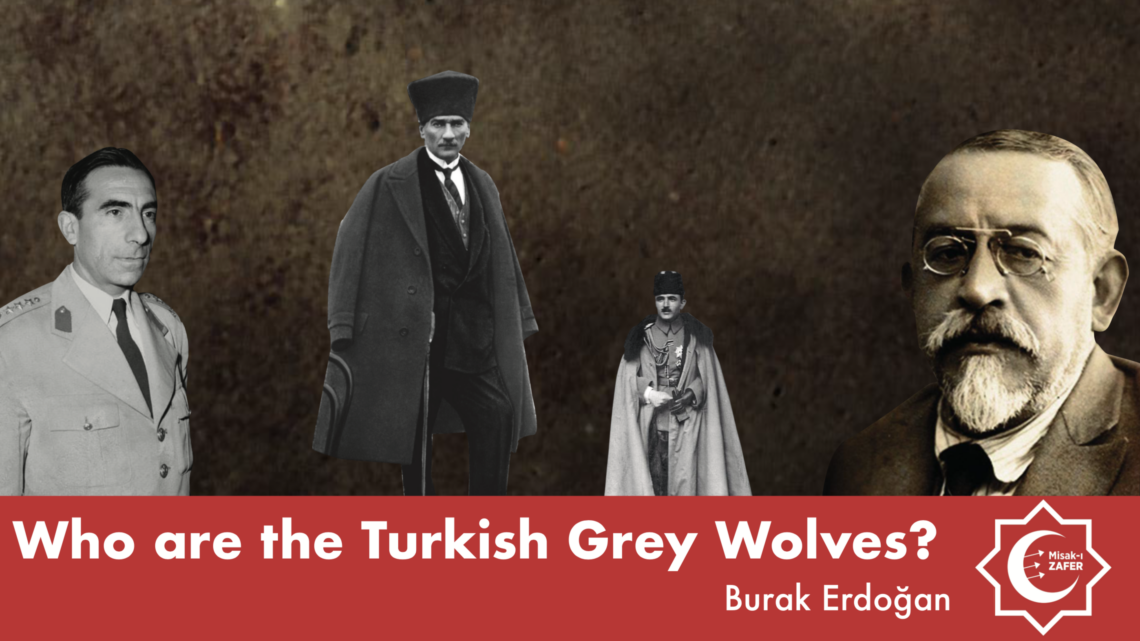 Who are the Turkish Grey Wolves?

At the historical stage, some of the Turks moved to Anatolia, which is known as Turkey today. Some stayed back in Turkestan, Siberia, Tuva and Yakutsk. On the 16th century, the Turkish reign was reaching from Morocco to Kazan, Poland to India. Because the Turks were living apart, with time they formed new states. After forming various states, with the new age and imperialist attacks, some of the states formed by the Turks collapsed and the age of captivity started.

After falling off power, most of the Turks started to dream of a united Turkic state. This has occurred on letters between the Ottoman Empire and the Turks who are living in Turkestan in the 18th century. Nader Shah was also involved in these talks of a unified Turkic state. Also, the Ottoman Turks were sending letters to Bukhara, Turkestan, calling their kinsman to form an alliance against the Russians.

Anyway, the Turks could not keep up with the technological changes. They became more dependent to the imperialists by time. Meanwhile, names like Ismail Gaspıralı, Yusuf Akçura, Ziya Gökalp, Ömer Seyfettin, Namık Kemal, Zeki Velidi Togan and many more started the nationalist movement. Before the Turks entering the Great War in 1914, Turks were searching ways to rejoin their kinsman all over the world. The nationalists in Turkey established associations in Turkey, centralizing in Istanbul. The major occurrence of the Grey Wolf at these associations as a national symbol was at the Turkish Hearths sign at 1912.

The symbol of the Turkish Hearths.

After the Ottoman Turks were defeated in the Great War, the Turkish Nationalists started the War of Independence against the imperialist nations who were terrorizing the Turks in Anatolia and aiming to colonize the Turkish people. After the Turks entered the war under the leadership of Atatürk, they defeated the invading Greeks, French, Italians and British independently. They formed a new state based on the Turkish Nation and gave a peace call to the world. The Turks formed a new democracy and Turkish women gained the right to vote at 1934. The first women war pilot was also Turkish. Also, the first African pilot Ahmet Ali Çelikten fought with the Turkish Nationalist against the imperialists and was a member of the nationalist movement. These examples of the nationalist government would definetly state that the nationalism in Turkey is not based on gender, race or ethnicity. Turkish Nationalism is an ideology which is respectful to colors, differences and cultures. The ideology is based on the Turkish culture by Ziya Gökalp’s statement. Gökalp is not alone with his statement, he is reflecting the general thought on nationalism of the Turks. Atatürk, the head of the nationalist movement in Turkey states that his ideas were shaped around Ziya Gökalp, Ömer Seyfettin and Namık Kemal. Mustafa Kemal Atatürk, who fought against Imperialism also used the Greywolf symbol until the end of his life. He even named one of his companions as “Mahmut Esat Bozkurt”. Bozkurt means grey wolf in Turkish. 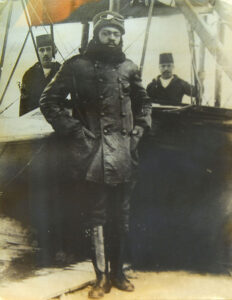 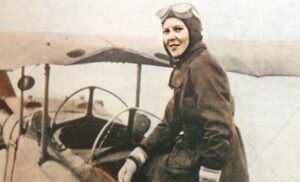 After the departure of Atatürk, because of the Soviet threat, the Turkish politics time to time created folk devils of the Turkish nationalists, who were the main actors on the way of independence. Names like Nihâl Atsız, Alparslan Türkeş, Nejdet Sançar and Reha Oğuz Türkkan were imprisoned and faced false accusations such as they were fascists in 1944.

Before getting on how the Turkish Nationalists became known as the Grey Wolves, it should be stated that being a Fascist or Nazi and a Turkish nationalist is impossible at the same time. The Turks are not ethnic dividers such as the Europeans, they want to protect the weak and live in a humane sense. The reason of this false information is the Turkish leftists. They were funded by the Soviet Russians and the only propaganda technique they knew was claiming their opposers are Fascists or Nazis. 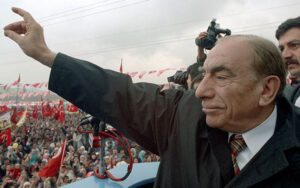 After 1961, the cold war entered a dead end. The Russians and Americans started to duel on different continents. The communists were funded by Russia and the liberals were funded by Nato. The communists started to plunder the Turkish cities, to kill innocent students and formed separatist terror organizations. Some of the communists believed that Turkey should also become a part of the USSR, some wanted to form a Kurdish government so they could bring their feudal order back on the Kurds and keep exploiting them.  The Grey Wolves both protected the Turks and other ethnicities in Turkey. The Kurds were murdered by the PKK and the Russians were exiling the Turks in Crimea and Caucasus to death. What the Balkar and Karachay Turks experienced were just an ordinary example for the Soviet imperialism.

Alparslan Türkeş, who was an officer for the Turkish Army before entering politics and Türkeş’s friends stood up against the anarchy and terror formed by the communists. The communists were even raping women and then defending themselves with the excuse that the woman they raped were fascists. The slogan used by the Grey Wolves was “Neither America, Russia or China, everything is for the Turks”. On 1969, the Republican Villagers Nation Party changed its name to the Nationalist Movement Party. Under the Nationalist Movement Party, groups and individuals who were calling themselves as grey wolves united and started to work together. Meanwhile, the Turks in Cyprus was also giving a war of independence and their symbol was also the grey wolf. 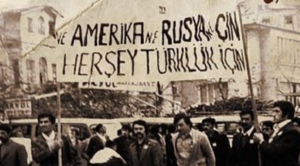 The Grey Wolves carry the banner “Neither America, Russia or China, everything is for the Turks” before 1980. 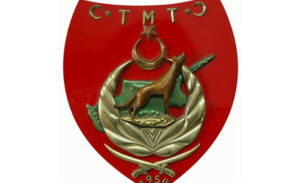 The Grey Wolves are standing against terrorist groups such as EOKA, DHKP-C, ASALA and PKK since the 70’s. Although they have always fought against who are the enemies of the Turks, after 1969, the name which contained the Turkish Nationalists all around the World as a whole were called the Turkish Nationalists. They have also fought the continuation of Nazi’s in Germany after 1990. The Turkish Grey Wolves also brought the end of ASALA, the Armenian terrorist organization which has murdered the Turks outside Turkey.

Within the years of struggle in Turkey, attacks on the Turkish nation heated up. After the declaration of the Soviet Republics, the communists lost their sponsors. They decided to join the terrorists. The destination of the leftists in Turkey was unfortunately PKK, a terrorist organization which has murdered thousands of Turkish soldiers and civilians. Hasan Şimşek, Aybüke Şenay Yalçın, Fırat Yılmaz Çakıroğlu and Furkan Kocaman was just some of them after the 2000’s. These were all innocent civilians, who were the victims of PKK.

After 2000’s, PKK found sponsors overseas. This made them able to form a party under the name of People’s Democratic Party, with the co-chairmanship of Selahattin Demirtaş and Figen Yüksekdağ. Demirtaş and Yüksekdağ both praised Abdullah Öcalan, who has a major role in the execution of thousands of innocent Turks. Because they have praised terror, they are both imprisoned right now. The Turkish Nationalists, Grey Wolves were the only group who stood up against PKK and PDP in the cities of Turkey. 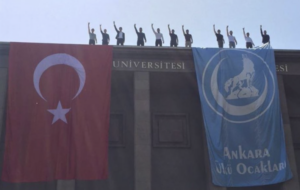 Unfortunately, today in France the Grey Wolves organization is banned by Emanuel Macron. Macron is a hiden French-Catholic right winger and he is a product of the Islamophobic European policy. Also, Germany is debating about banning the Grey Wolves in Germany. Today, Germany and France both claim that they have free speech in their country. Is this the truth? Of course not. The French government is supporting Charlie Hebdo, which is insulting the Muslim population all over the world. Macron is  provoking the Muslim Turks so he can mirror the Turks and their organization Grey Wolves as radical terrorists. The reason of Macron being this mad at the Turks is in Eastern Mediterranean and Karabakh, the sides he supported was beaten by the Turks.

Even though France claimed that they were trying to prevent terror attacks in their own country, the main reason why they banned the Grey Wolves organization is because they are afraid of the truth. Just like the Armenians, who killed Orhan Gündüz in Boston just because he was changing the “Barbarian Turk” image in the eyes of the Americans. Macron is afraid, because the Turks have saved the lives of Austrian police officers in Vienna and the false image he is trying to create is collapsing.

The world should always remember that the Turks are one of the largest populated nations in the world. A world equilibrium without the Turks can never be formed. If the world wants peace, the Turks must be on the table when the debate starts. If the Turks are not involved in the debates or if they can’t solve their problems with diplomacy, the Eastern Mediterranean events and the war of Karabakh should be a reminder of the Turks capacity. Even if the Grey Wolves are banned as an organization, the ideas and spirit of the Grey Wolves will last forever.