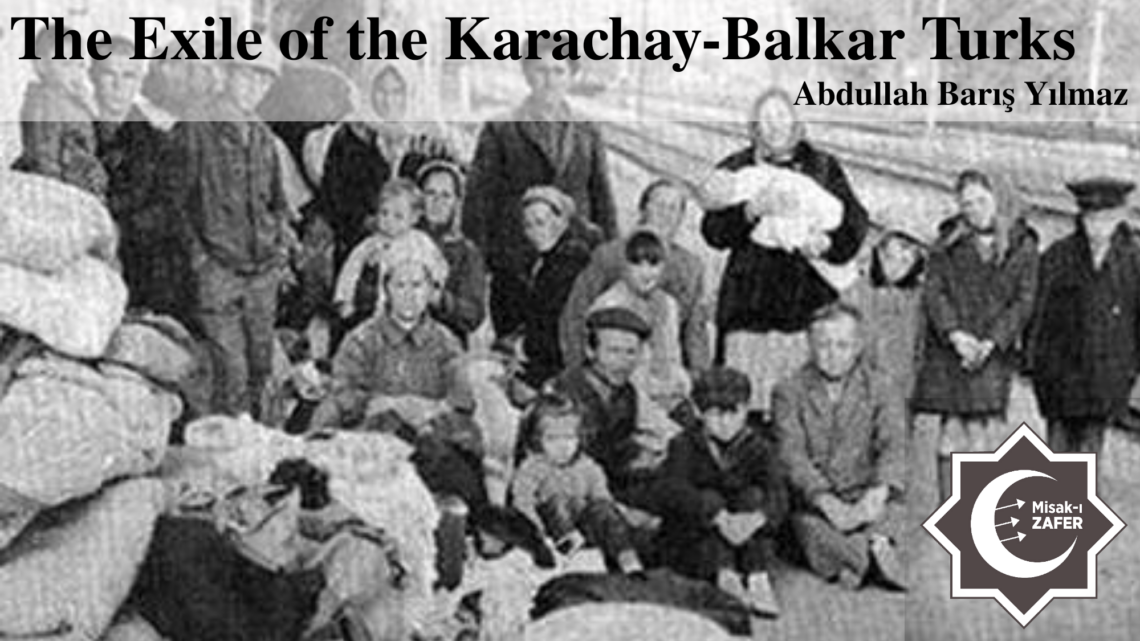 The Exile of the Karachay-Balkar Turks

The Exile of the Karachay-Balkar Turks

Karachay and Balkar Turks are two brotherly Turkish communities currently living in the Russian Federation in the Karachay-Cherkess Republic and the Kabardino-Balkar Republic. Since these two communities have lived together in the same geography for years, they speak Karachay-Balkar Turkish, which is formed by melting the Turkish dialects they speak in a pot. Although these two communities have became like flesh and bone because they have  lived together in the same geography for years, they are two Turkish communities based on different tribes. Karachay Turks are descendants of Kipchak Turks who have lived in the Caucasus for a long time. Looking at the origins of the Balkar Turks, it is suggested that the Huns were people consisting the Bulgarians who migrated to the west in the 4th century and stayed in the Caucasus. Balkar Turks claim that they are the Khazar Turks living in the Crimean geography and that they took the names of Malkar Bey, who led them, under their own clans. This is also the reason sometimes the Balkar Turks are called the Malkar Turks. The complete integration of these two communities by living in the same geography is one of the greatest symbols of the Turkish communities’ interdependence. Of course, this loyalty and the power arising from this loyalty disturbed many people and the Karachay-Balkar Turks suffered great persecution due to their ethnicity in the Caucasus, the geography of suffering.

The exile suffered by the Karachay Turks and the Balkar Turks in 1944 was a very important move to ensure the Soviet’s survival in the Caucasus. Karachay Turks and Balkar Turks were one of the most important peoples in the Caucasus who did not want and reacted to the increasing Russian pressure since the beginning of the 19th century. With their location in the far north of the Caucasus and their determined stance there, they challenged the Russians at every opportunity, like a set protecting the Caucasus. The Karachays and the Balkars also played an important role in the establishment of the United Caucasus Republic, which was established after the 1917 Bolshevik Revolution.

The United Caucasus Republic was occupied by the newly established Soviet Union, such as the Democratic Republic of Azerbaijan, the People’s Republic of Crimea and the Alaş Orda Government, which were established after 1917. Karachay Turks and Balkar Turks, who showed great resistance here, withstood the attacks of the Soviet Union for 3 years, but eventually the United Caucasus Republic was defeated by the Soviet Union. Aware of the power of Karachay and Balkar, the Soviet Union put in place a very logical and evil plan to divide this power at least a little. The Soviet Union, which divided the territories of the United Caucasus Republic and established small republics subordinate to it, included the Karachay Turks in the Karachay-Cherkess Republic, while the Balkar Turks were included in the Kabardino-Balkar Republic. The purpose of the Soviets here was to separate the Turkish tribes Karachay and Balkars and to force them to live together with the Adige tribes, Kabardine, Circassian and Abaza. Thus, by separating certain tribes of the two peoples who rebelled against him and uniting them in different republics; The plan to organize, keep their language alive (Russian is the common language that Turks and Circassians can speak among themselves), that is, to forget their nations.

Even after this incident, Karachay Turks systematically continued their rebellion many times. During their rebellion, the Karachays, who also provided connections with the Balkars and Chechens, were trying to reunite in the Caucasus geography and almost opposed the Bolsheviks. In fact, their revolt reached such a high level that the Bolsheviks called the Karachay Turks “the unrelenting enemies of the Communist regime”.

The Karachay Turks, who gained great power in the Caucasus, almost ended the Soviet rule over the region with the Germans reaching the Caucasus. The Karachays, who agreed with the Germans, finally ensured the freedom of religion in the Caucasus and removed the Kolkhoz, where they were very uncomfortable, and was replaced by the private property system. German journalist Eric Kerhn, who was there during this period, describes the joy of the Caucasians at that time:
“We are especially good with local Islamic elements. Volunteer cavalry units are formed all around. The green war flag of the prophet is flying. An air of friendship is blowing. The Muslim people here are a formidable enemy of communists. As I entered the town, a cavalry battalion consisting of Karachay people was going to their service on the mountain, laughing. Tall, bronze-faced beautiful young men are standing on saddles as if … ”
As can be understood from these words, the Karachay Turks fought with the Bolsheviks in the mountains to keep their culture and religion alive, and in a way, they ran to the martyrdom just for this cause. Young men like tall, bronze-faced beautiful molds …
No matter how much the Karachay Turks started to achieve what they wanted in the Caucasus, they also had some problems with the Germans. The wish of the Karachay Turks was not a government under the yoke of the Germans, but the United Caucasus Republic, which had to be re-established. Although they also had problems with the Germans, it was decided not to fuel this debate until the Soviet Union was completely eliminated.
Later, when the winds of war began to blow against the Soviets, the Germans began to withdraw from the Caucasus and turned to other war fronts. During this retreat, some Karachay, Balkar, Kabardian and Ossetian troops went to these fronts with the Germans. Taking this opportunity, the Soviet Union started attacking Karachay lands and started massacres here regardless of women or children. Despite these attacks, the Soviets, unable to suppress the Karachay gangs, revealed their last dirty plan and put into action the decision to exile the Karachay Turks, the leading independence leader in the Caucasus.
The Soviet Union started to exile the Karachay Turks on 2 November 1943 with the decision taken on 12 October 1943. According to the figures specified during this exile, 69267 Karachay Turks were put on animal wagons and sent into exile in an inhuman way. Immediately afterwards, Balkar Turks were also sent into exile on March 8, 1944. During these exiles, the race of the population of Karachay and Balkar Turks lost their lives.
After living in exile around the world began Karachai and Balkaria Turks, the Caucasus except Turkey, Kazakhstan, Kyrgyzstan, Uzbekistan, Syria and live in the United States. Karachai-Balkar Turks, especially living in Afyonkarahisar and Eskisehir in Turkey. Karachai-Balkar Turks, where he founded Karachay-Balkar associations and where to seek to protect the rights and working culture.