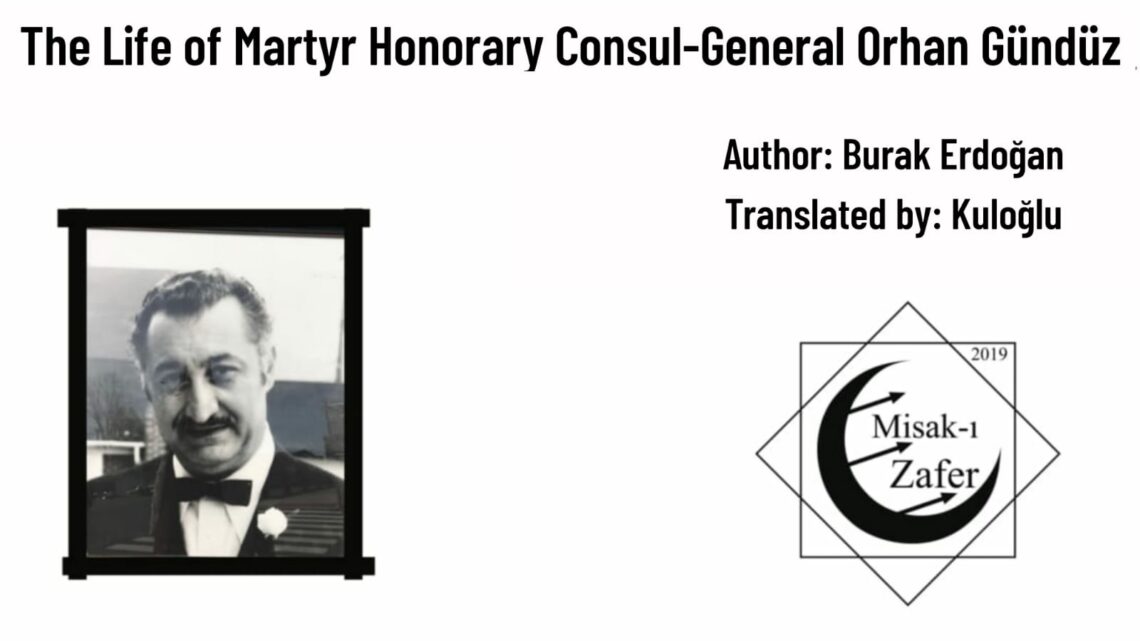 This article was previously written by Burak Erdogan who one of our writers. I only have undertook the translation of this article. I leave a link below for those who want to read the original of the article in Turkish.

Orhan Gündüz, who was murdered by Armenian terrorists in Boston on May 4, 1982, was born in 1922 in Sarıyer, Istanbul. Gündüz, who spent his childhood in Emirgan, graduated from the military school in 1942 and served within the Turkish Armed Forces until 1954. He left the Turkish Armed Forces when he was a captain in 1954 and was interested in foreign trade in Istanbul until 1963, when he settled in America.

Gündüz, who settled in the city of Boston in the US state of Massachusetts, became a well-known figure in Boston in a short time. Orhan Gündüz moved to Boston for his son Ferdi Gündüz’s university education. Later he founded his own business in Boston, trading conducted in Turkey has moved to America. He helped the Turks who came to Boston between 1963-1971 to get used to the order in the US. Orhan Gündüz was a successful name in social relations. He was also known for his helpfulness. So much so that he won the love and respect of non-Turkish people in Boston. For this reason, Gündüz started to work as an Boston Honorary Consul of the Republic of Turkey, in 1971.

Gündüz became almost a father figure among the people of Boston. In Boston, in addition to Turks, Greeks, Arabs and Armenians also knocked on Orhan Gündüz’s door when their heads were in trouble, and the late Gündüz did not refuse those who asked for help due to Turkish tradition.

Despite this, Orhan Gündüz, who they visit frequently when they were in trouble, was attacked by ASALA that founded by Armenian terrorists in the 1970s, EOKA that founded by Greek terrorists and Arabs that attacked Turks in the Middle East with the Baath regime they established. Supported by the Armenian diaspora in particular Armenia, ASALA martyred 31 Turkish diplomats between 1970 and 1985, harming vulnerable expatriate Turks. ASALA organized bomb attacks against Turkish travel companies in California in 1980. In addition, ASALA barbarously attacked the Turks that outside Turkey at every opportunity. The Armenian atrocity in Khojaly on February 26, 1992 is another example of the Armenians’ hostility towards Turks. The Armenian terrorists’ attempting to kill the Turks at every opportunity they find will never be erased from our memory.

In America, Orhan Gündüz glorified the name of the Turkish nation and played an important role in breaking racist prejudices against Turks in Boston. At that time, the Armenian diaspora, who persecuted Turks in the world, repeatedly threatened Orhan Gündüz, who blocked the perception operation they carried out in addition to their aggression. Although Orhan Gündüz was aware of the many diplomats and harmless civilians who were massacred by the Armenians, he did not boldly heed these threats. Armenian terrorists bombed the gift shop in the center of Boston upon Gündüz’s response to “I don’t be afraid of your threats”. The perpetrators of this incredible attack in the centre of Boston could not be found, and just the insurance company ridiculously repaired Gündüz’s shop. Orhan Gunduz never agreed to resign to the Honorary Consulate of the Republic of Turkey, despite his life is in danger. Having been under threat for a long time, Gündüz did not make concessions to Armenian terrorists. Gündüz, who returned home from his workplace on the evening of May 4, 1982, was shot by the Armenian terrorists, who had been following him for a long time, on his daily return journey and was martyred at the scene. People of various nations witnessed the martyrdom of Orhan Gündüz, gave testimony and drew a robot picture of the murderer terrorists, unaware of each other. Unfortunately, the American Federal Intelligence Agency (FBI) and the Boston Police Department did not want or failed to find the killers. Both situations are a great embarrassment to the United States and an indelible stain for both institutions.

The funeral prayer of Martyr Honorary Consul Orhan Gündüz was performed in the Quincy Mosque in New England under “high security measures”, and after the funeral prayer, the body of our martyr was buried in Forest Hills Cemetery in Boston. The Turkish school, which was opened in 1994 in order to keep the name of Orhan Gündüz alive, continues its education without interruption. In addition, in the location where Orhan Gündüz was murdered by the Armenian diaspora, it has been organizing events to commemorate Orhan Gündüz, Turks living in America since 1983. With these events, the name of our martyr lives and becomes immortal.

The martyrdom and life of Orhan Gündüz is an example for Turks living abroad. Gündüz, who had no official weight and was not even acting as a spokesperson, was threatened many times just because he directly reflected and kept Turkishness alive, and was murdered by the Armenians for his upright stance and Turkishness. I commemorate Orhan Gündüz and all our elders who were martyred for the sake of Turkishness once again with mercy and respect, and I invite every Turkish who comes to Boston in the US to visit the grave of the deceased Gündüz and stop by the location where he was martyred. God bless and glorify the Turk.