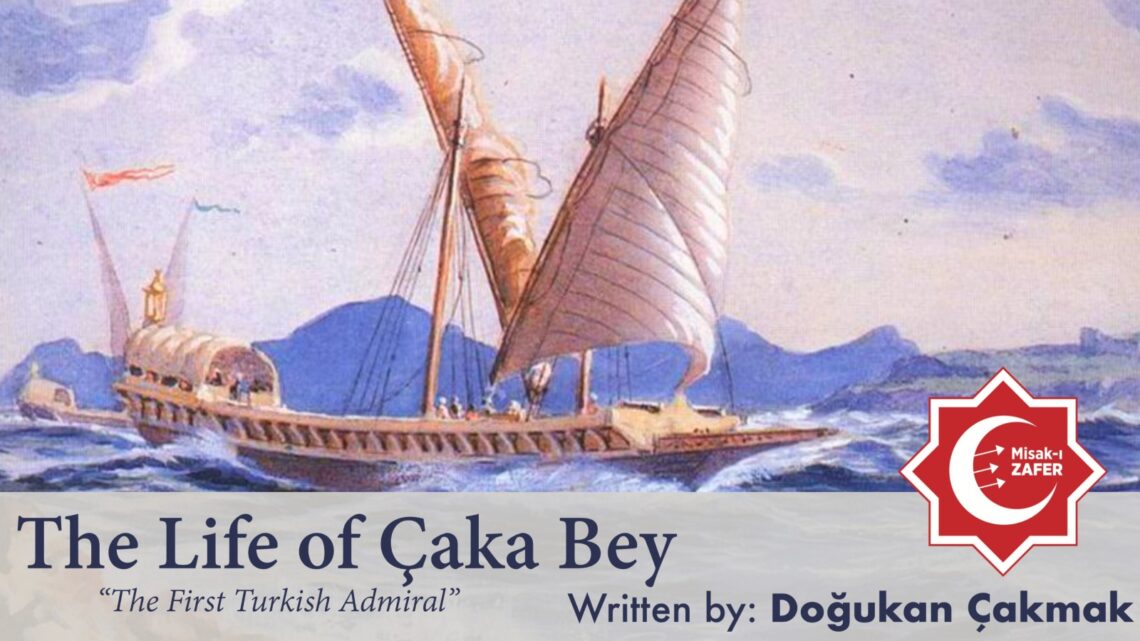 The Life of Çaka Bey

It is accepted that naval history of the Turks started with “Çaka Bey, son of Çavuldur”.

Çaka Bey is the son of Çavuldur Bey, who served as Alparslan’s frontier commander in the Battle of Malazgirt in 1071. At the beginning of the periods when Turkmen tribes raids to the interior of Anatolia, Çaka Bey made raids towards the west in the early 1000s.

Çaka Bey was captured by Byzantium at 1079, but he was not treated as a prisoner and was presented to Emperor Botaneiates because of him being a respected commander. He was detained in Emperor’s palace by welcoming him with appreciation and compliments, and he was even given the title of ‘Protonobilissimos’ , indicating that he was a hero of the nobility.

However, when the dynasty changed, all his titles were taken back and thus Çaka Bey left the palace. Understanding the importance of seamanship during the years he spent in the Byzantine palace, Çaka Bey’s first job was having made the Greek masters around him to build nearly 40 ships to form the first Turkish navy. After that, as a Seljuk commander fighting in the Western Anatolian coast, he conquered Izmir and establish a principality (beylik).

The nomadic Turks, who came from the steppes along the way from the Central Asian steppes to Anatolia on horseback, started to exist in the sea for the first time during the time of Çaka Bey. This situation surprised the Byzantines a lot. This move was the second test of Central Asian Turks with water after Issyk Lake.

It is obvious that the biggest dream of Çaka Bey, who conquered Lesbos and the North Aegean coasts in a short time, was to take Istanbul and take over the Byzantine Empire. He even declared himself the Byzantine Emperor at the peak of his power. For this, he first took Abidos, known today as Nara Cape, which controls the entrance of the Dardanelles. According to his plan, it would be possible to conquer Byzantium by organizing the Pecheneg Turks, who came to Edirne from the Northern Balkans and forced the Byzantine, and the Anatolian Seljuks who came to Iznik, by attacking himself from the sea and by attacking other Turkish tribes from the land. To achieve this goal, he even gave his daughter to the successful Seljuk Emperor Kılıç Arslan 1 whom he had good relations. And made him his son-in-law.

East Roman Commander Dalassenos took action for peace talks in order to stop Çaka Bey’s unavoidable rise. Çaka Bey said that he would give the islands and accept peace on the condition that he marry the Emperor’s daughter and become the ruler of the Izmir region. When his proposal was rejected, he responded with an interesting answer. Çaka Bey left the Eastern Roman commander astonished by reading Homer’s poem “The Night Is Approaching” as Greek. He stabbed the dagger of fear to the heart of the Emperor,  and his conquest swiftly continued. By taking advantage of the revolts that the Byzantine navy was struggled in Crete and Cyprus, he dominated the Aegean Sea and dominated Western Anatolia up to the Dardanelles.

At that time, the Seljuks were following the policy of connecting the dynasties that established powerful principalities in the east to the capital or to eliminate them. Fearing for his throne, the Eastern Roman Emperor sent a letter to Kılıç Arslan, stating that Çaka Bey wants to be an emperor and that this situation posed a danger to both Eastern Rome and Seljuks, and advised him to rule with peace or sword. Çaka, who is unaware of the alliance of the Sultan and the Emperor, demanded a meeting with the Sultan. Kılıç Arslan welcomed Çaka with a ceremony; afterwards, Kılıç Arslan killed him during the feast.

By looking at how he conquered Izmir 300 years before than Chieftain Timur, he would have conquer Istanbul as well if it is not the disloyal diplomacy that killed him.

A madman blessed by poseidon,

A whirlwind of archipelago.

But most importantly, the first Admiral of Turks.