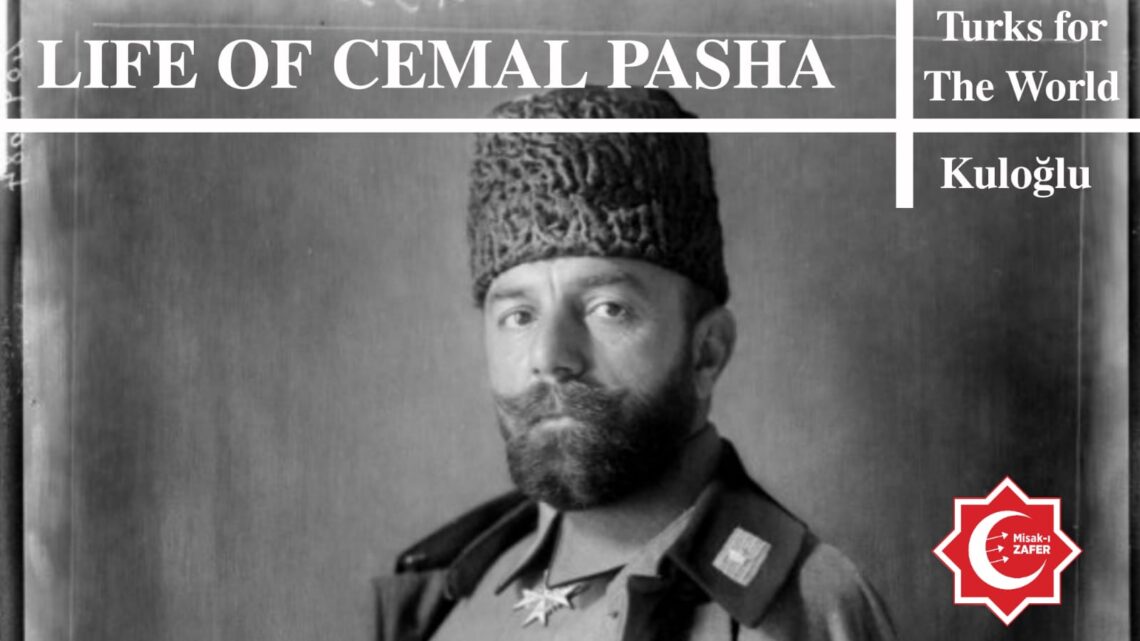 Ahmet Cemal Pasha was born on May 6, 1872 in Mytilene. His father is a military pharmacist Mehmet Necib Efendi and his mother is Binnaz Hanım. Cemal Pasha was registered with the population of Istanbul. Its address was the house number 10 in Üsküdar Sanjak, Zühtü Paşa Mahallesi, Hasırcıbaşı Street. Cemal Pasha had his first marriage with Bekir Pasha’s daughter while he was working in Kırklareli on February 19, 1897. His wife died shortly after birth with her child. After this bitter incident, Cemal Pasha’s health deteriorated and he left Kırklareli and came to Thessaloniki.

He made his second marriage on June 2, 1898, shortly after he went to Thessaloniki. Cemal Pasha had four sons, Ahmet Rüşdi, Hasan Necdet, Mehmet and Hasan Behçet, and a daughter named Kamran. After marriage, he lived with his children, sister, mother-in-law and stepmother. Halide Edip Adıvar, who came to Syria at the invitation of her during the First World War, was the guest of Cemal Pasha’s summer residence in Lebanon and had the opportunity to meet her family closely. Adıvar has described its family members as simple, loving and kind.

Cemal Pasha, who was sent to Istanbul by his father to become a soldier, completed Kuleli Military High School in 1890. On 13 June 1890 he was enrolled in the war class of the Turkish Military Academy (Mekteb-i Harbiye-i Şahane). He successfully completed the school in 1893 and became a lieutenant. He entered Military College (Erkan-ı Harbiye) to complete his staff training. He received the rank of captain on 28 December 1895 after a successful two-year training period.

Cemal Pasha, who was keen on scientific research while at the Academy of War in 1898, completed his book on Pleven Defense while working as a officer. On March 27, 1899, he was appointed to the Thessaloniki Chief of Staff that under the command of the Third Army. In the same year, the foundations of a major revolution movement were laid in Thessaloniki.

The Committee of Union and Progress(İttihat ve Terakki) was established in 1899 by the students of Military Medicine, İshak Sukuti, Mehmet Reşit, İbrahim Temo and Hüseyinzade Ali under the name Ittihad-ı Osmanî. On the same date, that committee was called Ittihat ve Terakki. The committee started to spread in the country, especially Rumelia. However, as a result of the II. Abdulhamid’s drastic measures, the members of the committee had to continue their activities abroad. Despite these problems, the Committee of Union and Progress began to spread rapidly among the members of the Third Army. Cemal Pasha, who started to work under the order of the Third Army in 1898, started to be interested in the activities of the committee as of this date, but there is no definite information about the date of entry into the committee.

The duty of Cemal Pasha in the Committee of Union and Progress is to win the officers against the autocracy administration. He was promoted to Staff Major on July 19, 1905. In order to spread his works to wider areas, he wanted to leave his fixed duty on the committee and went on a mobile mission and on September 19, 1906, he was appointed as “Inspector of Eastern Railways Thessaloniki Line”.

Now he could wander his region as he wished, establishing organizations among military units everywhere. He received the results of these efforts in a very short time and became one of the leading names of theThe Ottoman Freedom Society in Thessaloniki. The Ottoman Freedom Society opened a branch in Manastir after Thessaloniki on 30 December 1906.

A meeting was held at Cemal Bey’s house a few days before the announcement of the Second Constitutional Monarchy and a telegram was sent to Istanbul and the constitution was asked to take effect immediately. Thereupon, the Second Constitutional Monarchy was declared on 23 July 1908. Meanwhile, Cemal Bey became the Staff Colonel on 28 July 1908. In Istanbul, on 13 April 1909, a revolt that called “31 March Uprising” broke out in order to overthrow the constitutionalism. Cemal Bey took part in suppressing the rebellion and was subsequently appointed to the governor of Üsküdar on 18 May 1909.

Meanwhile, there were big problems between the Turks and the Armenians. The Armenians started arming rapidly to establish an independent state in Çukurova. Upon the deterioration of the situation in the region, Cemal Bey, who was the most organizational and disciplined leader of the Committee of Union and Progress, was appointed as Adana Governor on October 2, 1909. As a result of the hard work of his, the problems of the people of the region were resolved within a few months, people returned to their normal lives and the problems between the Turks and the Armenians were largely resolved. He was appointed as the Governor of Baghdad on June 14, 1911. Here he first dealt with public works. Then, he took important measures against the Arab Nationalism Movement in Baghdad. Cemal Bey, who resigned from the Baghdad Governorate, was appointed to the Konya Redif Party Command on 3 October 1912 with the start of the Balkan War. Cemal Bey was given the duty to inspect the region between Saray, Vize and Pınarhisar. He was promoted to Colonel on October 6, 1912. Meanwhile, he suffered from a cholera epidemic. Treatment of Cemal Bey, who was delivered to Istanbul, was started immediately. In this way, he recovered again in a short time and started to work as the “Range Inspector and the Chief of the Army” on 26 December 1912.

Some writers in the press, some officers in the army made religious provocations, and claimed that constitutionalism means “profaneness”.  As a result of these provocations, a revolt broke out on 13 April 1909 in Istanbul. Evaluating this incident as an attempt to eliminate the Committee of Union and Progress, Cemal Bey advocated suppression of the incident using violence. He took part in suppressing the revolt.

After the government coup known as the Sublime Porte D’etat(Babıali Baskını) on January 23, 1913, when the Unionists took over, Cemal Pasha was brought to Istanbul guard. During this duty, he tried to support the management of the party by suppressing the opposition that developed against the Committee of Union and Progress. In the same year, he participated in peace negotiations with the Bulgarians as a military member. Upon the removal of the Istanbul guard, he became the deputy commander of the 1st Corps. In December 1913 he became Brigadier General. On March 11, 1914, he was appointed to the naval ministry.

Cemal Pasha, who has been known as a pro-French for a long time, went to France in order to gain the support of France before the First World War. But he could not form a political alliance, and upon this he reluctantly supported the Ottoman-German Alliance, which was held on 2 August 1914, together with the Enver Pasha and Talat Pasha.

Cemal Pasha was appointed as the Navy Minister after the Ottoman Empire entered World War I. In November 1914, he was appointed as the 4th Army Commander in Palestine. In 1915 he became Lieutenant General. He organized the Canal Operation to take Egypt from the British. But the desired results could not be obtained.

He also clashed with Arab rebel leaders during his stay in Damascus. In fact, he had friendly contacts with many tribal chiefs and minority representatives, and he did many activities in Arab countries such as opening schools, building roads, and researching archaeological artifacts. But he did not show mercy to the rebel Arabs, who betrayed them with the ambition of independence and attacked Turkish soldiers. In the courts established, each treacherous Arab was executed. With the propaganda of the British, he was given the nickname seffah (bloodshedder).

Upon the Ottoman Empire’s defeat from the First World War, on the night of November 2, 1918, he went to Odessa with a German submarine together with Enver Pasha and Talat Pasha. Meanwhile, on July 5, 1919, Cemal Pasha was decided to be expelled from the army and executed in absentia by the martial law court in Istanbul (Âliye Divan-ı Harb-i Örfi).

Cemal Pasha never stopped fighting. He tried to make all Turks in Asia independent. Then he went to Afghanistan to modernize the Afghan army, which fought against the British. As a result of the political change of the Bolsheviks, he moved to Tbilisi. Here, for a while, he participated in the activities of Enver Pasha and a group of Turkists to unite the Turks in Russia and all Asia around anti-imperialist and Turanian purposes. Even if he did not personally take part in the National Struggle, but far from Anatolia, which he loved so much, his mind was always there. He established relations with the leaders of the War of Independence in Anatolia and He constantly corresponded with Mustafa Kemal Atatürk.

The fact that Enver Pasha started the war against the Russians worried Cemal Pasha very much. He came to Moscow on May 8, 1922 to complete his unfinished business in Afghanistan.  But he was not well received due to Enver Pasha’s activities. Despite all his efforts, Cemal Pasha could not persuade the Russians to support the Indian Revolution again. Despite all the negative developments, Cemal Pasha stayed in Russia for two more months. During this period, he tried to delete the negative opinions of the Russians about Afghanistan and Anatolia. Cemal Pasha left Moscow on 5 July 1922 and arrived in Tbilisi. He sent a letter to Mustafa Kemal Pasha and requested a meeting. He chose to stay in Tbilisi until an answer came. During his stay in Tbilisi, he often went to the Turkish Representative and exchanged views.

On July 21, 1922 while in preparation for returning to Turkey in Tbilisi, Cemal Pasha were martyred by the two Armenians  terrorists named Karakin Lalayan and Sergo Vartanyan. Her body was first brought to Tbilisi and then to Erzurum and buried in the Karskapı Martyrdom.

Cemal Pasha was a politician and commander who loved his country. He has strived for his country’s redevelopment.  in Turkey, now many patriotic young commemorate him and his friends with best wishes. Rest in peace.