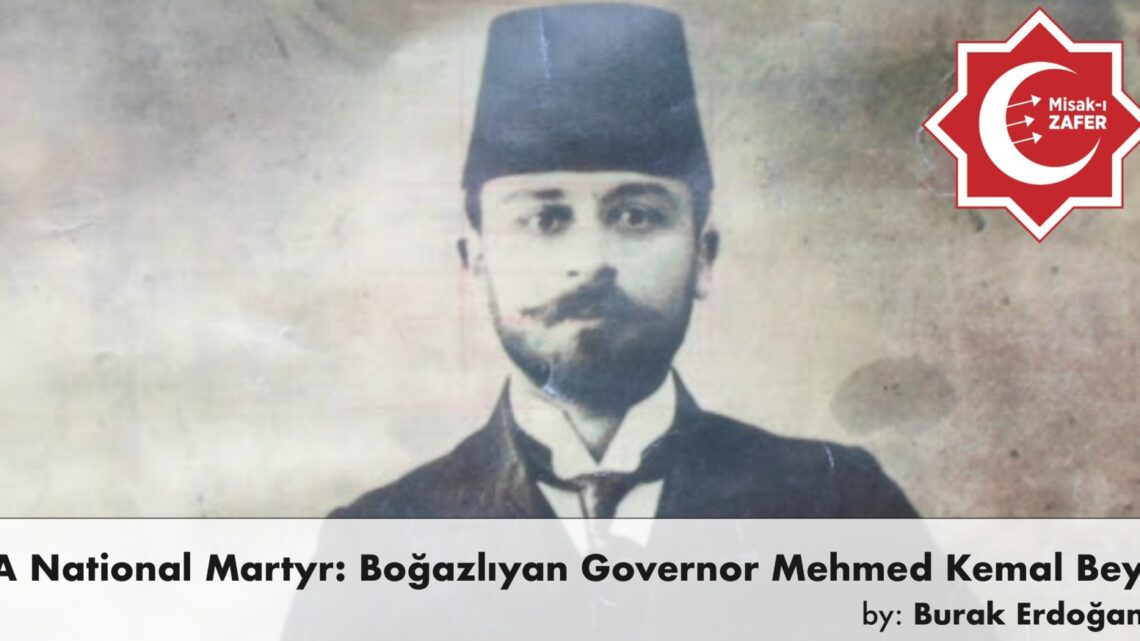 Mehmed Kemal Bey was born in 1884 in Beirut due to his father’s job. His father was a government official in Beirut and Mehmed Kemal Bey started his education in Beirut. After finishing primary school, he attended Antalya High School and İzmir High School. After completing his high school education, Mehmed Kemal Bey attended Mekteb-i Mülkiye, which was in İstanbul at the time and now serves as “Ankara University Faculty of Political Science”. After graduating from Mekteb-i Mülkiye, Kemal Bey went to Rhodes Island for internship. He completed his internship in Rhodes. Meanwhile his internship, Kemal Bey instructed Turkish and Social Sciences in Rhodes High School.

After being assigned to the province office on 1911, he first started serving the Ottoman Empire in Doyran, a town in Macedonia. After the Balkan War, he was appointed to Gebze in 1912 and Karamürsel in 1913. Meanwhile, the Ottoman Empire entered the World War and the services of Mehmed Kemal was needed by the Unity and Process Association. During 1915, Mehmed Kemal Bey was attempted as the governor of Boğazlıyan, which was a town near Yozgat.

Anatolia at the time

The last century of the Ottoman Empire was full of riots and bloody wars. One the the bloody riots were organized by the Armenian Militias. The Armenians were financed by Russia and time to the Britain. The main goal of the Armenian terrorists were to form a Armenian State between Lake Hazar and the Mediterranean. To form a state, the Armenians started systematic raids on Turkish villages. The bloody actions of Armenians have gone so far near 1915 that, they have even started to choose pregnant woman and bet on the child’s gender in her belly. To learn the gender, they cut off the pregnant woman’s belly and enjoy this barbarian murder.

After some brutal murders, the Ottoman Government first tried to work out peace between the Armenians and Turks in the region by giving the Armenians extra rights. Even tough the circumstances was on the Armenians advantage, the barbarian militias did not stop and kept on raiding and murdering innocent people without differing woman or child. The Armenian Militia’s felony’s went so deep that they even started to attack the Ottoman officers and soldiers.

As a solution to this barbarian attacks in lust of blood and money, Talat Paşa and Enver Paşa decided to move the Armenians from Anatolia in a systematic way to stop the Turkish-Armenian conflict. After the Armenian Terror pervaded, as a reaction the Turks also started to get together. Anyway because all of the Turks who can use a weapon was at the fronts, defending their country the Turks could not answer the Armenian terror. Because the Turkish population who stayed at their home at the World War was only the citizens who are not able to use a firearm, the Armenian fire grew up and took more lives.

Meanwhile he was the Governor of Boğazlıyan, Kemal Bey was sued multiple times by the Armenians because the Armenian Monster was not stronger than the Turkish Governor. They slandered Governor Kemal Bey with looting the Armenian Property. After attending the courts against him, Mehmed Kemal’s innocence was proved and he kept on serving the Turkish nation as he should be.

Kemal Bey had done everything he can to relocate the Armenians in his province safely, although because the Armenian Terrorists could not resist him, they were going to slander him again later. After getting news from home that their families were murdered monstrously by their so called “neighbors”, some Turkish Soldiers deserted from the army and figured a way out to get back and take revenge from the Armenians. Even tough the number of deserted soldiers are not stable, the Ottoman Imperial Archives show us that desertion from the army is very rare.

Some attack by small groups have occurred against the Armenians but the Ottoman Government instantly took the situation under control and made sure that the deserters were back at the battle front. The Armenians kept on attacking the Turks, Arabs and Kurds on their way and followed a policy of “Cleaning The Great Armenia from Infidels” which the aim was execute the Muslim population to have a smooth transition to their dream state.

After the Ottoman Empire lost the World War, the Nationalist Union and Progress Government was dismissed and the new government under Damat Ferit Paşa was a collaborator with the invading countries such as the United Kingdom, Greece, France and Italy. Also under pressure, the Damat Ferit government was tolerating the Armenian terror.

After a short time of the Ottoman Defeat to the Allied Invaders, Kemal Bey was arrested and brought to Istanbul with the accusations of Genocide and War Crime. Kemal Bey was again proven innocent, as there was no such crime against the Armenians, the Armenians were the ones to blame for crime.

The proving of Kemal Bey’s innocence made the Armenians go mad. They were so mad that they even went to the British office in Istanbul and pressured them by not staying loyal to their deal. The deal was centered on the Armenians spreading fire and terror in Anatolia and the Turkish Army dividing their energy to deal with the Armenian terror. Also Kemal Bey’s relations with the patriots in Turkey was known, as he was also a patriot.

There are reports about the witnesses have not even lived near Boğazlıyan and had never seen Kemal Bey in their lives in Mehmed Kemal’s last case. The case which took Kemal Bey to death was built upon a lie. The court found Kemal Bey guilty and sent him to death row at 8 April 1919.

On 10 April 1919, Boğazlıyan Governor Mehmed Kemal Bey was executed by being hanged and martyred in Beyazıt Square. His last words to the crowd which was there to see Kemal Bey one last time was:

“My dear countrymen, I am a Turkish Officer. I have done what I was ordered to do. I am sure that I have completed my duty which is assigned to me. I swear to you that, I am innocent. My last words will be that I am innocent today or tomorrow. To look cute in the eyes of the foreign invaders, they are going to hang me. If this is justice, I doom justice! My lovely brothers, I leave my children to the Grand Turkish Nation. This marvelous nation would surely take care of them. May Allah protect our nation and country. Amin! I have debts to pay but I don’t have a fortune. I leave my 3 children as orphans for the Turkish Nation. Long Live Turkish Nation…”

After Kemal Bey was executed, the Turks among the crowd started a riot against traitor Nemrut Mustafa Pasha and the British Soldiers in Beyazıt Square. Mehmed Kemal Bey was a symbolic name after that they in the independence war. As a Turk, I swear that I will always pay my depth to Mehmed Kemal Bey and all of our martyrs who have died for us. May Allah rest his soul in heaven!