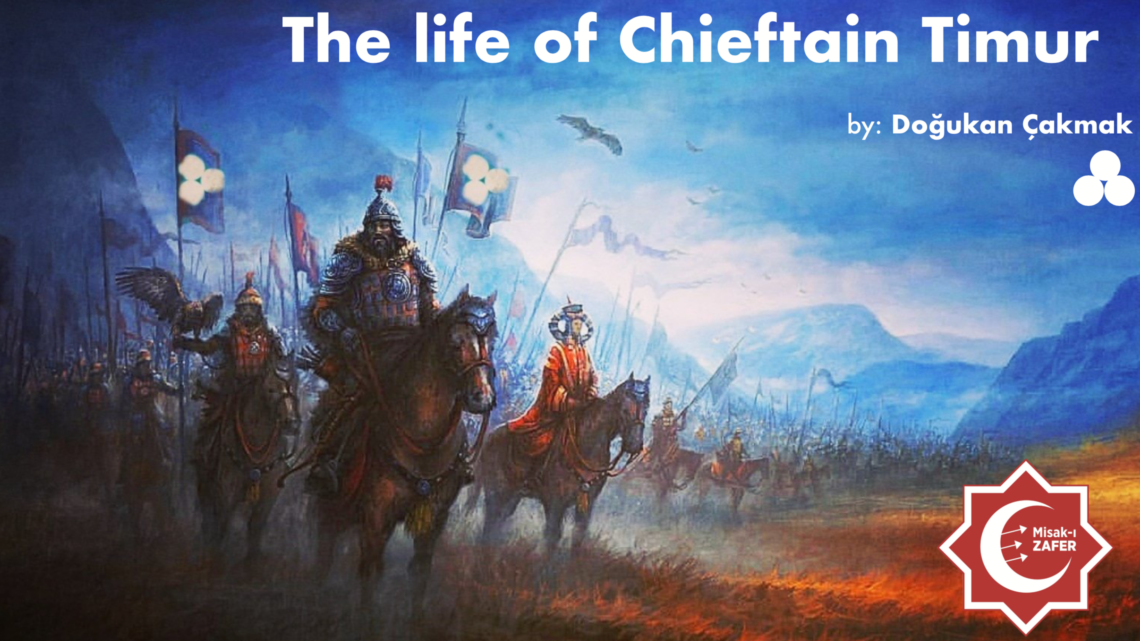 The Life of Chieftain Temur

At 9 April 1336 a man borned with a blood on his hand at south of Samarkand, Chagatai Khanate in a city named Kesh .  With this blood clot on his hand and his white hair like an old man, people who witnessed that, commented this as he is going to be shed too much blood and soon he will become a successful man.  There is a belief that whoever borns in a time that Venus and Jupiter in a single line, that person is going to be a strong and superior ruler of the world. There is a single word for it ‘’Sahip-Kıran’’, and Temur not only born at this time but also  proved it with his actions.

Temur means ‘’Iron’’ at the Chagatai Language which his mother-tongue .He was a member of the Barlas , a Mongolian tribe that had been Turkified in many aspects. His father, Taraghai was described as a minor noble of this tribe. His childhood past with raids to travelers and military educations.

When Temur arrived Transoxiana at 1360 he declared his loyalty to the Khan of Chaghatai Khanate . In return Khan gave him his ancestors land Kash. At his 24, he became Barlas’s leader. After that he appeared as a regional power in Khorasan. And allied both duty and family connections with noble Qazaghan, Khan of Chaghatai by marrying his granddaughter  Oljay Turkhan Agha. But his loyalty did not stand longer than expected, an insurgency happened and Khan sent his son to Transoxiana as governor and made Temur his servant. Temur could not stand to be the second man and reacted by becoming an outlaw. Next several years he wondered around Upper Asia with his friend Amir Hussein who is grandson of Qazaghan and brother of Oljay Turkhan Agha .

As the records, at one time Temur only had his wife and one man in his command. They were caught by the Turkmens as they fled to Horasan in 1362 and were released after being imprisoned for two months in a bug-filled barn with his wife in Mahan. Later, upon the call of Sistan’s judge Melik Fahreddin, who was in a difficult situation against his enemy, Temur came to help with a force of a thousand people. When Fahreddin, who called himself to help, did not fulfill his promises, Temur wanted to leave but was cut off by the Sistanians at desert which known as ‘’Death Desert’’ (Deşt-i Mergi). At this fight Temur injured from his right leg and his right hand that crippled him, which led him called by Tamerlane.

After his wounds healed, Temur and Hussein came to Transoxiana again. At that time, he started to become famous with his inventive ingenious tactics, which he used on the battlefield to both execute his glory and take over Transoxiana. In a combat, he made his soldiers fire hundreds of campfires in the hills around the forces of the enemy, which were many times superior to his, and convinced them that they were surrounded on all sides. While his enemies were running away, he had his horsemens hold a  branche with lots of leaves. Thus, the dust in the air evoked the thought that a giant army was coming from the dust.These manipulations worked very well.

Temur and Hussein dominated Transoxiana after long struggles. In 1365, the former governor of Transoxiana, Ilyas Khoja, once again attempted to occupy. When he met the forces of Timur and Hussein, his army was near Tashkent. Timur suppressed the Mongols, took the advantage and signaled Hüseyin, who was the commander in shape, to finish the enemy with his own men. But Hussein stood back. Mongolian forces were not late to take advantage of this vital mistake; they did not leave a man who had been attacked and sworded on all sides. Ten thousand people died .This incident had sowed seeds of doubt on his alliance with Hussein. In the most critical moment of the combat, his confidence against Hussein, who refused to strike enemy, was shaken. Timur considered himself betrayed. After the death of Temur’s wife , the last bond between families had broken.

In 1370 Temur rushed towards Balkh, the capital of Hussein. After Temur prevailed and conquered the city, Hussein was captured and handed over to him. Timur, who had not ordered the killing of Hussein because he had promised to forgive his life before, nevertheless did not prevent Keyhüsrev, one of Hussein’s enemy, from doing this.

Following the death of Hussein, as a custom of Genghis Khan, Temur had Chagatai Khan on to leadership as a puppet. This was happened just because it was Genghis Khan’s custom. The real power was in the hands of Temur. With an ascension ceremony. On April 9 , 1370 Temur crowned as the ruler of Chagatai with the approval of the Balkh convention. After that Timur married with Saray Mulk Khanum , widow of Amir Husain  and daughter of Qazan Khan,  to gave legitimacy to his administration. This marriage entitled Timur to bear the title of Küregen (Gürgan), which means the groom , because Saray Mulk Khanum was a noble woman from Genghis Khan’s family.

So far it was just beginning of Temur Empire’s era. He build his empire from nothing and conquered three quarters of the known World. When he was crippled in a fight with Sistanian’s, he leaned  against a wall and started to think about how his dreams fall apart because of his wounds. He turned his head and saw an ant  tirelessly climbing a rock,falling down ,climbing again… He said himself  ‘’if such a tiny creature never gives up why should i ? a great warrior’’. And i think this instance is the milestone of Temur. As an undefeated commander, he is widely regarded as one of the greatest military leaders and tacticians in history. Of many conquerors with humble origins in Turkish history, he is the last conqueror of great steppe’s. Unity of great warrior and great commander’s wit in his presence confirms that he has a blessing from God. And that’s the only thing needed by a Turk to conquer the World.

On no page of history writes Temur as defeated.