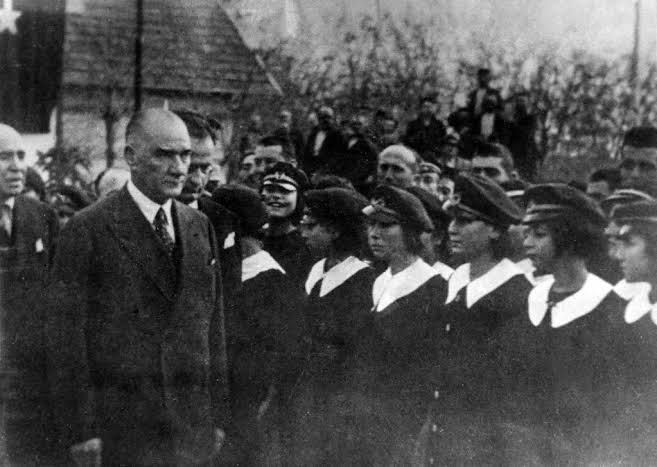 Change in perception of child that started from late Ottoman period, with republic, gains different identity. “As a potential and public actor, the child no longer belongs solely to his family. The child is sometimes the future of the nation, sometimes future of the race, the producer, the military and the citizen of tomorrow.” (Oztekin, 2019, p.1232)  The militarization of youth in the early republican period focused on two important goals: protection of the country against external enemies (harici bedhah) and protection against internal enemies (dahili bedhah). The reasons such as protectionism from the war, the rise of nationalism and the fact that the republic’s cadres are mostly soldiers show that external enemies are still seen as a threat. Preparatory courses for military service are one of the biggest concrete steps taken in this regard.  Only two years after the proclamation of the Republic, the curriculum of the military courses is organized, “first for the 1926-1927 academic year.” (Maarif Vekâleti, 1927, within Ünal, p.88) This was the result of process that started from Late Ottoman Period with Youth Organizations and Scout Organizations. While these organizations were in social area, military preparation course made this process more systematic.

The textbooks consist of the following titles: “Army Organization, Military Law, Military Training, Weapons or Weapon Information, Shooting, Topography, Mobilization, Combat Procedure and War History.” (Ünal, 2015, p.89)  Although the main targets of the military service courses were male students, girls achieved many statuses that they could not obtain for a long time in the Early Republican period and they were granted with the militarization process. “In 1926, girls and boys students salute, wearing hats, collective marches, celebrations and so on. The Board of Education took a number of decisions.” (Gündüz, 2017, p.76) In other words, while men are seen as the main source of the army, women, together with men, are the protector of the regime. Here the second purpose of militarization comes to the fore: protection against internal enemies, namely, being guardians of the regime. Although women are not seen as the first choice in protecting the state against external enemies, it has been tried to be made as valuable as men in terms of protection of the regime. Mustafa Kemal’s encouragement of his adopted daughters to education in this direction is a precedent. His adopted daughter Afet İnal was capable to write a book, which name is Askerlik Vazifesi, about military’s duties and this was used in Military Preparation Courses as a source. Sabiha Gökçen, the world’s first female fighter pilot, on the duty of military pilot. Although Sabiha Gökçen’s example seems more appropriate for the first purpose, she was a woman who is the protector of the regime in the axis of her duties. Because the woman has proven herself during the war years, she can now hold arms like men and take part in tasks like them. Even though we see the discrimination of women students in military preparation classes (the lessons was for men), Early Republic was the period when gender discrimination declined in militarization process. In the social sphere, the identity of the Turkish child was a whole. A Turkish child who is moral, healthy, intelligent, adhering to the values was the target regardless of their gender. In this context, the addressing emphasized in Yavrutürk and Cumhuriyet Çocuğu magazines is “Turkish Child”, and girls and boys are in the same frame in the covers.[1] Not a single individual is sacrificed for the purpose of raising youth as the protectors of the republic. Also, with using nation name, it is intended to unite people around a name. In these children magazines around the name of Turkish, was encouraged Turkish children.  In so much that, it is claimed that the whole civilization was created by the Turks.

“The Turk cannot be captured. Turks cannot be chained. He is the first ancestor of all mankind. People meet civilization with the Turks. Turkish means creative and powerful people. While the first people lived like a monkey in caves during the Stone Age, the Turks established their first civilization in Central Asia. They scattered all the lights of civilization on the world.” (Cumhuriyet Çocuğu, 8 Mart 1939, p.336, cited in Oztekin, p.1243). To obtain the prestige of being Turk, as a member of nation that spread civilization, person must born as a Turk, importance of blood and race mentioned many times. “In the play Children of Atatürk, the child hero expressed this pride and joy with the following sentences: “I am a Turk, I was born Turkish, I will die Turkish. I am so glad to be a child of such a great nation.” (Cumhuriyet Çocuğu, 5 Nisan 1939, 411, cited in Oztekin, 1242) This kind of words will seem appealing for a child even for children who are not Turk, because the image of Turks was showed as a hero. Turks are so confident, powerful, healthy, kind and respectful in children magazines. This look of Turks provided new phenomena to perception of children’s identity. After Ottoman Empire, while their ex-country was defeated, they were not disappointed and desperate. In contrast, they see themselves as a continuation of the supreme race, tomorrow of a great nation and guardians of their homeland, because instead of defeats, victories were told them.

Magazine covers also support this; motifs that used in covers are flags, celebrations, happy children, healthy and sportive youngsters, soldiers, Mustafa Kemal Atatürk, modern dressed people… Covers that were mentioned are attached.[2] All of these motifs symbolize Republic’s principles; independence, modernity, nationalism, secularism. While they gave messages to children, they also motivate them to adhere to the principles of Republic. In this context, they are exposed to principles at every moment of their lives in order to internalize them. It is clear that, this kind of education is similar as armies. Just as the soldiers, made them equipped and developed for the survival, the children were raised for the same purpose; because they are the hopes of Kemalist elites to carry these principles from generation to generation.

This provided mainly with curriculum of children’s, because it was the easiest way of reach all children who went to school. When the military preparation courses are examined, it is clear that the language addresses the soldiers, not the children. The main reason for that is the books were written by the soldiers themselves. “The authors of all textbooks consisted of officers of at least a rank of captain (yüzbaşı) and all books were first approved by the General Staff and subsequently accepted by the Ministry of National Education.”(Ünal, 2015, p.88)

This is an indication that the military and military service are above every institution. The superiority of the military over other institutions and the sine qua non hierarchy influenced the children in education to a great extent. Although the class presidential elections that came with the Republic seemed to be an application of democracy, the establishment of hierarchy among the students led to the establishment of authority and the internalization of such organisms in the military.  Even wearing uniform can be associated with the militarization period.  Afet İnan, in her book, mentioned wearing a uniform takes its place among the “distinctive elements of the army as an indicator that reminds friendship and obedience.” (35, cited in Ünal, p.91) So, in the meaning of obedience, wearing uniforms in school can mean obedience to the state.

As Ünal stated “Especially, Combat Procedures, Shooting, Topography, include quite technical narratives” (Ünal, 2015, P.89) in curriculum of military preparation courses. It means there is no difference between being a military school student and being a public school student. Especially knowing topography is very important. While its education was given in schools, in social area children magazines encourage children to know their country and its geography. “Another indicator of being a patriotic Turkish child is getting to know his country well. The promotion of cities and historical artefacts in Yavrutürk was aimed to create the love and awareness of country for children.” (Oztekin, 1244) In these magazines, different cities and different cultures of these cities were introduced. Also, traditions and customs did not forget, as an example, in 1942 Zeybeks were used in the cover of Yavrutürk. With these, it is aimed for children to know the regions with their culture, geography and folks. That was the duty of Turkish child as a guardian of the state and also regime.

As a result, in Early Republic Period there were significant changes, nearly, in every aspect of the state. To make permanent these changes the power of youth were used; because instead of changing old people, raising children in a way that aimed by Kemalist elites was easier. In order to raise these children, there was nearly a consensus among founder elites; a new education system was needed. This system was organized in a way that includes so much military figures. Military preparation courses was an important step to reach this goal, but also, with nationalist children magazines social areas were filled up with new state’s principles. In this context, the militarization process was started in Early Republic Period. In this work, the applications of militarization process were examined through the curriculum of military preparation courses and two sample magazines that published in Early Republic Period, which are Yavrutürk and Cumhuriyet Çocuğu. It is seen that all of them were the significant actors of militarization process. 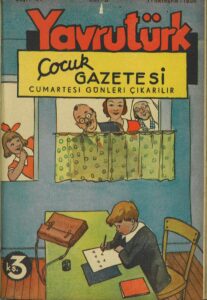 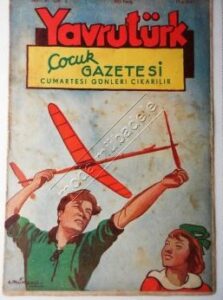 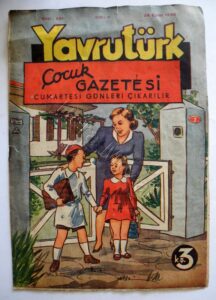 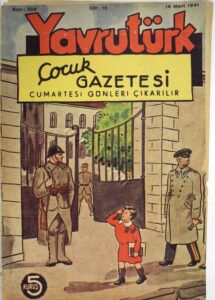 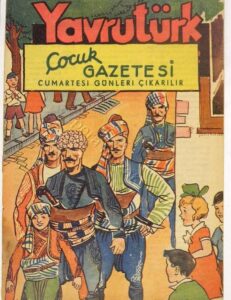 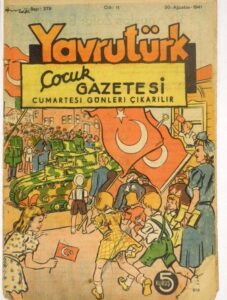 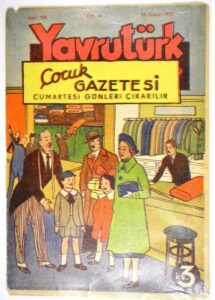 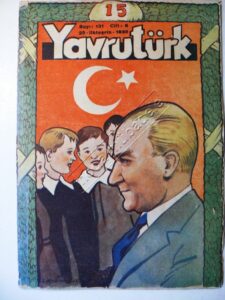 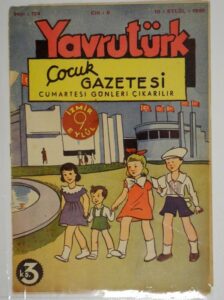 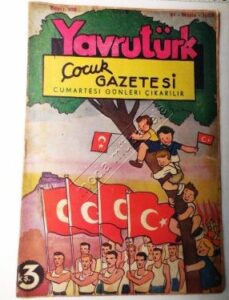 NEYZİ, Leyla. Object or Subject? The Paradox of “Youth” in Turkey,

KAPLAN I. (1999) The Ideology of National Education in Turkey. Istanbul: Iletisim Press