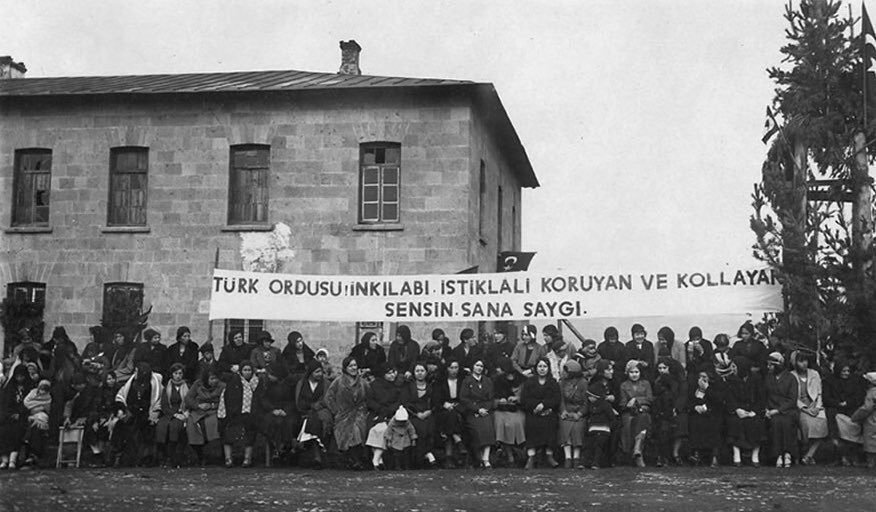 The Early Republic era was filled up with reforms and developments. Mustafa Kemal Atatürk who is the leader of the Turkish Republic and reforms, in order to set up and preserve reforms and new state structure, used military power and army efficiently.  The military was not only a place where force was used to protect the republic, but also the place where the values of the republic were taught. The youth, which is the source of military power, has been constantly nourished by military education and love of the army; army-nation awareness was kept alive in the Early Republic period. In this period, education was militarized in order to create nation-state consciousness and to build Turkish identity. “Young people are expected to meet modern, nationalist ideas through education and become carriers of these ideas in this society.” (Ünal, 2015, p.83) The increase in the value given to youth began with the rise of European nationalism, “In Europe and in their colonies, “young” and “youth” began to symbolize dynamism, progress, altruistic idealism and revolutionary will.” (Anderson, 1995, p.135) After European countries, the value of youth was realized in the Late Ottoman Period. Therefore, the militarization of education did not begin in the Early Republic period, and paramilitary youth organizations were established in the last period of the Ottoman Empire, especially with the efforts of the Committee of Union and Progress. “In the Ottoman Empire, especially in the aftermath of the Balkan War, while gymnastics, physical education and military training were made compulsory in the schools, at that time, With the Scout Hearth, the Turkish Power Association of the Turkish Hearths, the Ottoman Power Societies and the Ottoman Young Societies established during the First World War, it was aimed to organize the youth under paramilitary organizations.” (Ateş, 2012, cited in Ünal, 2015). These kinds of works maintained in the Early Republic Era.

The importance of militarism in education is to make children feel the existence of the new state, to show the authority and power of the state, and also to ensure that children are not isolated from this power; also to state that children were members of this power itself. The fact that Atatürk himself took the address of the Turkish youth in his speeches is the best example of this. “Turkish youth! Your first duty is to maintain and protect Turkish independence and the Turkish Republic forever. This is the primary basis of your existence and of your future. This constitutes your most valuable treasure. The child of Turkey’s future! Your duty is to save Turkish independence and the Republic. You will find the strength that you need to achieve this in the noble blood that flows in your veins!” (Atatürk, 1989, 1197 cited in Neyzi, 2001) In the Early Republican era, Atatürk’s basic belief in the establishment of the Republic was the high character of the Turkish nation, (10th Year Speech) which blended it with education that would raise it to the level of the modern state. When the young people’s education combined with their high character, it was believed that they can choose the most suitable candidate as the ruler in the republic, which is the most suitable form of administration for them. Therefore, Neyzi describe them as “guardians of the regime”. (Neyzi, 2001,105-106) “Education (including institutions such as the People’s Houses and the Village Institutes) played a central role in the Turkish social engineering project aimed at creating a homogenous population with a single shared identity.” (Kaplan, 1999, cited in Neyzi, 1999) “Young people were central to the ideology of Turkish nationalism because the goal of the regime was to create a new type of person with a new mind-set, imbued with the values of the Republic and freed of the shackles of tradition.” (Neyzi, 2001, 105)

The most abstract step of militarization of youth is the Military Preparation lessons (Askeri Hazırlık Dersi) which was accepted in 1926. In addition to that, some topics which are related to the Turkish history, responsibilities of Turkish youth to the state and information about geography of Turkey was added to other courses. “For example, it was announced that the topography of Turkey to geography courses; The Conquest of Istanbul , 93 Wars, The Balkan Battles, The Battle of Çanakkale and especially the Independence War of Turks to History course’s curriculum; issues such as military organization, the duties of the people during the war, public and youth organizations that assist the official organization, to the knowledge of citizenship courses (Malumat-ı Vataniye Dersi) and training that shown in the military training instructions will be added to the body training course (article 2).” (Muallimler Birliği Mecmuası, 1926, 780-781, cited in Ünal, 2015). The unavoidability of wars is explained in the books of Military Preparation courses because youth must know that it is a natural thing. Ünal pointed that “Without exception, in all the textbooks we examine, it is stated that wars are inevitable and unavoidable. (2015, p.92)  Cemil Tahir explained the basic urge of human to war in these words “In the creations of people, there is a tendency to think and superior to their own self before others. This tendency gives rise to feelings of vengeance and greed and these feelings cause a fight between people.” (1928, p.4-5) After acceptation of unavoidability of wars, he pointed the duties of youth: “If so, let us work, we all learn the duties of the war and thus strengthening our army and our nation and other states to increase the position and influence of other states.”  (1928, p.8) This course’s name and functions were changed overtime and was named as national security course (Milli Güvenlik Dersi) and national defence course (Milli Savunma Dersi).

“In addition to educational tools, popular periodicals were also used to train new citizens who adopted the values of the Republic. At this point, children’s magazines provided broad opportunities for power in reaching children as citizens of the future and adopting the values of the Republic.” (Öztekin, 2019, p.1229) The purpose, like all countries that strived to stay alive, was to embrace the Turkish youth in every field: in school, in family, in social life. In the Öztekin’s article, Öztekin focused on the Turkish children magazines which are Yavrutürk and Cumhuriyet Çocuğu in order to show “what ideal Turkish child is”. “‘Ideal Turkish child’ was represented as Kemalist, reformist, modern, hard-working, determined, ambitious, economical, moral, kind, helpful, respectful to individual, society and nature, nationalist, courageous and warrior, patriotic citizen around the dominant values of the Republic in both magazines.” (Oztekin, 2019, p.1230) These two children magazines are best examples of militarization of youth within the social life. The target of Yavrutürk can be seen clear in the introduction of magazine.  “You, in your tiny existence, are keeping alive the color of the Republic, the smell of it, the voice of the great revolution and its thought; the blood of your great race. You are the children of the republic, in right words. “(Demiray, Yavrutürk, 2 Mayıs 1936, 3)

Cumhuriyet Çocuğu served the same purpose of Yavrutürk. “Turkishness comes from blood and descendants were frequently repeated to the readers that they are Turkish children; it was reminded that they come from the noble nation.” (Öztekin, 2019, p.1242) Öztekin pointed that in the 25th issue of the magazine it was said “The elders of tomorrow; there is Turk’s oath in your blood, circulating in your veins. Let this oath live to eternity in your heart. The great people gave you today. The week of April 23 was the biggest holiday of you and your little brothers… Turkish boy, now it’s your turn. The homeland of your ancestors with the blood of them and their labour; you will take your guardianship, life and ascension as a sacred burden on your small shoulders.” (Cumhuriyet Çocuğu, 20 Nisan 1939, 447) The purpose of this kind of warnings to the Turkish children, give responsibility of republic and to prepare children to possible dangers like wars. Also, again the underlying message was being guardian, being soldier of the state. Militaristic symbols and messages are obvious: “You will grow and strengthen every year. One day, all of you will be soldiers (Mehmetçik).” (Yavrutürk, 3 Ocak 1942, 3).  Tahsin Demiray who is the owner of Yavrutürk maintained this kind of children magazines after the early republic era with Çocuk Haftası. The purpose of raising children as guardians of state, mostly, owned by the elites of Early Republic period because they are witnesses of the war and builder of new state; they attached great importance to education of youth. In this work I want to show a portrait of a Turkish youth in the Early Republic Period. One of the main purposes of Atatürk is providing maintenance of Turkish Republic for the next generation.  In order to do that, he and his friends, his followers attached great importance to education because they know the youth is heir of the Republic and the duty of protecting the Republic was among the youth. It leads to the idea of “guardians of the regime”(Neyzi, 2001: 105-106). The process of militarization of youth in school through the curriculum of lessons and also in social life through two of the sample of children magazines which are Yavrutürk and Cumhuriyet Çocuğu was examined. This culture that raising children as guardians leads to nation-state, greatly affected Turkish Republic.